Last week, Melbourne newspaper readers were greeted by the news that a group of Arab youths had formed a gang called, of all things, Arabian Soldiers Arab Defenders and were squabbling with their rivals on the other side of the city. The story was accompanied by three gangsters of supposedly Middle Eastern appearance with their faces concealed:

“Give it tomorrow, give it a year. We will hit back 10 times harder,” said Ronni, leader of northern gang ASAD or Arabian Soldiers Arab Defenders.

Let’s face it, nothing says “tough guy” quite like a paisley handkerchief wrapped cowboy-style around one’s face. And Ronni is one of the most menacing monickers for a gang leader since Tookie burst on to the scene.

But, in an Austrolabe exclusive, we can reveal for the first time the other members of the feared Arab Soldiers Arab Defenders: 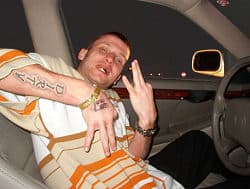