As regular readers will be aware, Austrolabe’s mascot is the pigeon-chested anti-Muslim campaigner Darrin (sic) Hodges. Here he is above (on the far right, with red shirt and video camera) with people we assume are his fellow “protectionist” chums. With friends like this, it will come as no surprise that Darrin also appears to be or have been a regular contributor to the neo-Nazi forum Stormfront, where unlike the other hairy chested extremists, he lacks the instinct for self-preservation and posts under his own name. Genius like that can only be a gift from God……………………………to us.

More recently, Dazza has made an appearance on the ABC’s Q and A program during a debate on the Camden Islamic school controversy. Darrin appears, wearing a red shirt and tie, and proceeds to ask a series of ridiculous questions in his irritating nasal voice.

You can watch his performance below: 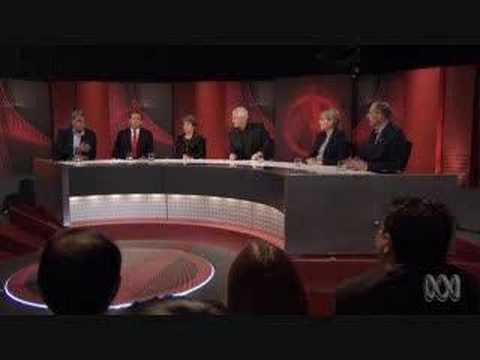 Hodges calls for all development to be subject to a “cultural impact statement” and responds to Australian Greens leader Bob Brown’s suggestion that Australian Muslims love their children with the compelling argument that “in Iran, you’d [Bob Brown] be hung”.

After watching his gormless public efforts, we can only conclude that the gene pool for the master race is rapidly shrinking. We also wonder how much of the so-called community resistance to the Islamic school is run by the neo-Nazi movement.