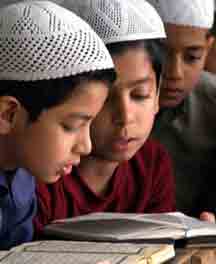 This series of essays is not meant to be a witch-hunt against a school. We have enough professional scurrilous rumour-mongerers in our community, without an amateur lending assistance. I am not concerned with the quality of ice creams in the school canteen nor the he said/she said gossip mill, but rather whether our whole approach to religious education is correct.

Like all discussions on Islam the only good starting point in the sunnah of the man we claim to follow: Muhammad the prophet of Allah, may Allah bless him. For a transmission of deen there needs to be:

Sheikh Adam Konda in Darwin has used this system for 10 years. Its effect has been so profound that a generation of children from blue collar dysfunctional Muslim immigrants has been transformed into religious, respectful and educated young adults. It is also prescient to observe that these children have done exceptionally well academically to a level that could never have otherwise been anticipated by the demographic of their parents.

Significantly, this doesn’t not need a school as much as it needs scholarship: authentic traditional Islamic scholarship. It also suggests direct transmission of both knowledge and spiritual mentoring. It is not examined scholastically but rather the character, conduct and ethics of the pupil form the criteria with which we may judge success.

Muslim communities will pay for the level of scholarship their children receive. If we wish that our children receive an authentic Islamic education such that they are transformed by it, then we must pay much, much more. Schools can incorporate this into their curriculum, but it is communities that train Alims and religious Muslims to be teachers and thus appropriate mentors for Muslim children.

Islam is then not confined to a religion class or the school’s glossy PR brochure but rather permeates throughout the whole school life, from the gardener to the principal. Rather than learn the rules of charity, ones sees charitable behaviour; instead of learning what piety or humility is, one experiences it in the school masjid or at least sees it on the faces of her teachers.

Not surprisingly, Islam is straightforward and easy to teach, it does not require august institutions (rather its transmission is inhibited within them), nor does it require complex organization. It requires that communities commit time, expend effort and spend money to train scholars who will teach and mentor their children.

Islam is a praxis, but we are now transmitting it as an ideology.