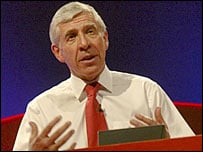 British MP Jack Straw has generated considerable controversy in the United Kingdom over recent comments critical of the niqab (face veil). He is, of course, entitled to his point of view and, as Abu Eesa has mentioned, we should welcome the opportunity to explain to non-Muslims what the niqab means. As he writes:

Islamically speaking, the majority of scholars consider the covering of the face for an adult Muslim female with the face-veil or niqāb in the presence of non-related adult males as a religiously praiseworthy action, whereas a minority considered it an obligatory act. Thus, for a Muslim woman to remove her veil in the presence of ‘foreign’ men would be considered abominable at the very least and at its most serious, totally prohibited.

Islamic Law recognizes that the niqāb can be removed for various civil needs such as that maybe suggested by Mr Straw, particularly the Hanbali school of legal thought as confirmed by the eminent Jurist Ibn Qudamah in his masterpiece al-Mughni. Muslim women have the choice in various scenarios to remove the veil for a certain need as detailed in the legal texts yet her desire to not become too friendly or involved with ‘foreign’ males shouldn’t leave at least other female members of the community in despair. Indeed, maybe one should debate the great problem that non-related men exactly have if certain Muslim women don’t wish to develop relationships with them, even in the most insignificant sense. Does one sense male insecurity here? Hurt male pride? Now that’s a thought.

However, the most concerning aspect of Straw’s commentary isn’t that he doesn’t like the veil, considers it a symbol of separation, or that he believes it hinders communication between men and Muslim women. The one aspect of all this that is, in my view, the most concerning is the admission that he asks veiled constituents attending his office to remove their veils before he will listen to them. Of course, we don’t know if he would refuse to listen to them if they didn’t remove their veils because, according to Straw, every veiled women had obliged him.

He sparked controversy when he told his local paper he asked female constituents visiting his surgery if they would uncover their faces. He said he made sure he had a female colleague in the room when asking someone to show their mouth and nose – and his constituents had so far always agreed to do so.

Given that Muslim women only cover their faces because they believe that it is religiously required or praiseworthy to do so, and not as some sort of trivial fashion statement, the fact that they all agreed to remove their veils for Straw suggests that they did so because they thought it was necessary. They did not, one can assume, take off their veils to reveal their faces with the same sense of ease as one might hang up one’s umbrella or take off one’s raincoat. Therefore, it is not unreasonable to assume there was some coercion — whether explicit or implied — at work here.

Some people have commented that Straw has the ‘right’ to demand what he pleases of those who visit him. If they don’t like it, leave. Now, this argument assumes that no contract already exists between Straw and those that seek his services. For example, it can be deployed in favour of the Muslim taxi drivers in Minneapolis that The Australian recently railed against for refusing to carry alcohol; and it could equally be applied, for example, to support the right of Christian pharmacies not to sell contraception or the right of Christian doctors to refuse to perform abortions. This is about people’s freedom to contract and the immorality of coercing people to provide goods and services against their will.

However, the relationship between an MP and his constituents is different. The reason I find this problematic is that, by being elected as an MP, the constituents — veiled and unveiled — have invested in Straw the right to represent them. He is, in a sense, their delegate and trustee who should act according to the mandate that is given to him. However, Straw is, in my view, breaching this implied contract by requiring or seeking to coerce some of his constituents to unveil before being able to avail themselves of services that he should rightfully provide them as their elected representative. It would, of course, be similarly inappropriate for a Muslim MP to require or seek to coerce constituents to veil and wear an abaya before being able to meet with him.