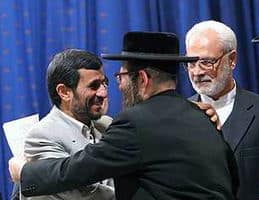 The conference of ex-KKK leaders, trucker’s daughters, contrarian Jews, and innocent Canadian professors with tendencies towards career self-harm recently convened by the Iranian state to “discuss” the supposedly fake Holocaust has been cast by some as striking a blow for “freedom of speech”. (Of course, people promising dissenting views were banned from attending; even Iranian understandings of free speech have their limits)

It is, of course, true that some Western governments have laws against holocaust denial whilst still claiming to believe in freedom of speech; and the Iranians are feeding off this almost hypocritical position. If these Western governments were to practice more of what they preached, the idea of denying the holocaust would lose a lot of its appeal.

“Iran is your home and is the home of all freedom seekers of the world,” Ahmadinejad said. “Here you can express your views and exchange opinions in a friendly, brotherly and free atmosphere.”

We shouldn’t be naive enough to think that the Iranian government’s sudden interest in freedom of speech in Western polities is anything more than opportunistic lip service and part, one might assume, of its wider objective of becoming the hegemonic power in the Muslim world. The Iranians are not interested in the Holocaust because of a jealous concern for historical truth but because, in their view of the world, if they can prove that the Holocaust never happened, the justification for Israel disappears. And, as we all know, talking big about wiping out Israel is a guaranteed crowd pleaser for Arab and, it seems, Persian leaders.

As Richard Cravatts at History News Network puts it:

If the victim status of Israel—and by extension, all Jews—can be diminished by exposing the lie of the Holocaust, the Palestinian becomes the more aggrieved victim, a people victimized by former victims, the Jews, who spread the lie of their own suffering for material ends. Thus, for Ahmadinejad and other deniers, “denying the atrocity,” wrote Michael Shermer and Alex Grobman, “denies any moral authority to victims of the atrocity.” It is not without irony, of course, that while the Arab world, not to mention Israel-haters in the West, want to rob Jews of the piece of dismal history that brought about the extermination of six million of their brethren, they are eager to repeat regularly the vile comparison they draw between the perceived behavior and shared values of the Zionist state and the Nazi regime.

When Ahmadinejad waxes lyrical about Iran as a bastion of intellectual freedom and freedom of speech, he is being even more hypocritical than the very same European states that he lambastes.

This has led to a situation where Iranian authors whose views are not in line with the Iranian government’s are facing de facto bans and are forced to publish their books outside Iran or on the Internet. Facing what seems to be a hopeless situation, some renowned Iranian writers have started withholding their works, rather than seeking publication, a form of self censorship.

They arrest journalists for criticising the state:

Reporters Without Borders has condemned the arrests of two journalists, Shirko Jahani and Hussein Saidpour, and the suspension of a weekly newspaper amid mounting pressure on the media that has prompted five provincial newspapers to stop publishing in a gesture of protest.

They shut down newspapers that criticise the State:

The Committee to Protect Journalist condemns the closure of Iran’s most prominent critical newspaper today for failing to remove an executive accused of publishing blasphemous articles and insulting officials.

They ban students from attending university because they are “outspoken”:

Human Rights Watch called on Iran to immediately revoke bans on students from attending university because they hold political beliefs not to the government’s liking, and to allow registered students to exercise their rights to freedom of expression and association

They have blocked the New York Times internet site, Youtube and even Wikipedia. They have even banned fast internet access:

Reporters Without Borders expressed deep concern for the future of the Internet in Iran, where censorship is now the rule rather than the exception, after the video sharing website YouTube and that of the US daily “New York Times” were added to the country’s blacklist. In addition, the English version of the online encyclopaedia Wikipedia was blocked from 1-3 December 2006. These steps come two months after Iran banned high-speed Internet access.

They want all websites dealing with Iranian news to be registered and controlled by the state:

Reporters Without Borders has voiced concern about a government decision, taken at a cabinet meeting on 27 November 2006, that all websites dealing with Iran will have to register with the culture ministry in the next two months. The new rule will probably be difficult to implement and seems designed above all to give the authorities grounds to close down independent news sites.

The Iranian Judiciary should prosecute officials responsible for the arbitrary detention and alleged torture of several bloggers in 2004, instead of prosecuting the bloggers for expressing their opinions, Human Rights Watch said today.

On December 3, branch 1059 of Tehran’s Judiciary commenced a trial against four men, Roozbeh Mirebrahimi, Shahram Rafizadeh, Omid Memarian, and Javad Gholam Tamimi, on charges of “participation in formation of groups to disturb national security,” “propaganda against the state,” “dissemination of disinformation to disturb public opinion by writing articles for newspapers and illegal internet sites,” and “interviews with foreign radio broadcasts.” The court has held one closed-door session, and the trial is scheduled to resume on December 17.

Friends of freedom? Err, no.