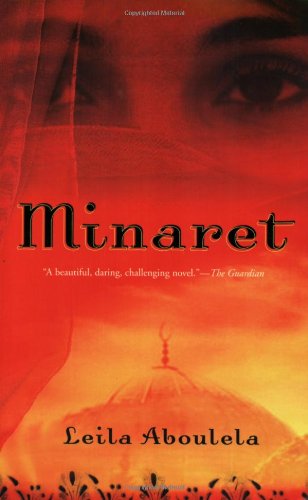 It seems that there are virtually no Muslim authors who inject a fairly universal and positive Islamic worldview into their fiction (and I am speaking strictly about fiction). We’re all aware of the ubiquitous Muslim interest novel: the picture of a veiled woman, her kohl-lined eyes peering out from her black scarf, gracing the cover. And then there’s the literature that deals with Muslims in the Western setting. For example, White Teeth (although the author Zadie Smith isn’t Muslim), Nadia’s Song, Brick Lane, The Map of Love and so on.

I’ve just finished reading Minaret by Sudanese author (and UK resident) Leila Aboulela. Her books are highly regarded, and Minaret was longlisted for the Orange Prize for Fiction. See an excellent in-depth review of Aboulela’s work published by Al-Ahram Weekly.

I’m not a huge fan of the stilted writing form that plagues so much “award-winning” literature, but aside from that, in terms of content, I closed Minaret and wasn’t sure what to think. Is this halal fiction? I wondered.

Let me just clarify that I am an avid reader of fiction in general. But is there such a thing as “halal fiction”? What is taboo in writing? Does the message have to be one that ultimately promotes Islam? If so, Minaret is successful on the last point.

Aboulela’s story sees her heroine, Najwa, take a mighty fall in life, only to seek – and find – salvation in Islam. She is surrounded by women who, despite their personal difficulties, are married contentedly to religious Muslim men. I know characters like the ones she portrays. While Aboulela portrays self-haters and those who reject Islam, she has room and care for those Muslims we never read about: the ones who love being Muslim, who, despite their faults and weaknesses, continue to love being Muslim. The book is, I think, essentially about the beauty of religion and realising that your only reliance is on Allah.

Having said that, the journey to this discovery involves sin and despair for Najwa, and much like reality in general, nothing in her life is neat and pure. We skip back and forth, but in the present, Najwa is unmarried, without family, in her late 30s and a maid for wealthy Arab families. She’s working for a lady, Lamya, and her daughter, and Lamya’s brother, Tamer, also occupies the home Najwa cleans everyday. Despite both being observant Muslims, Najwa and Tamer become complacent in their interaction and fall for each other. Aboulela doesn’t glorify it, but I think she does try to keep it realistic (although I didn’t find their courtship entirely believable).

Now, let’s agree that this sort of thing happens in reality. We can expect, and accept, that literature and fiction will generally have such content, but would Muslims generally view this as haram or inappropriate at the very least to read or portray? Or is it like poetry, which has been written and regarded for centuries as a suitable creative form? If there are no explicit scenes, and there is an overall message to it, would Muslims be receptive to it? Although, I do think her general audience, much like for other Muslim interest authors, are non Muslims.

I think fiction has a place in our lives, and it can often deliver worthy messages more adequately than non fiction would, particularly given that it is likely to attract more readers. But what are the limits of narration?