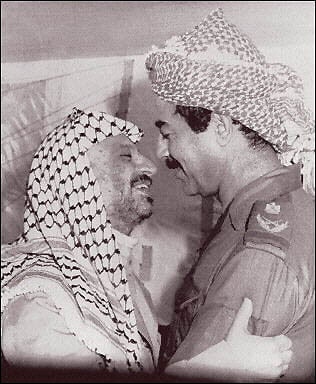 In the last three days, I’ve counted three young men and two women — non-Arabs and presumably non-Muslim — wearing Yasser Arafat-style scarves wrapped around their necks. That might not be uncommon if one was talking about a university campus but this was just walking around the CBD, riding public transport and entering offices. Unlike the socialist types one sees around university wearing those things as a sort of political statement, these people seemed to be wearing them more as a fashion statement. Maybe you’ve noticed the same thing too.

So what does it all mean? Well, I don’t know but according to this article in Heeb Magazine, Arabs are now cool and the emergence of the keffiyeh as a hot fashion accessory is proof of that.

With keffiyehs wrapped around the necks of hipsters coast to coast, one of the hottest bands of the moment going by the name Beirut, and Comedy Central snapping up shows like the “Axis of Evil Comedy Tour” and The Watch List, it seems like America’s pop-cultural tastebuds are primed for Middle Eastern flavors—for better or worse, it’s becoming cool to be Arab-American.

To be sure, most kids who sport the patterned scarf are more likely concerned with whether it goes with their oversized sunglasses and skin-tight leggings than with any political implications it may carry. Nevertheless, their attraction to the keffiyeh is actually spawned by the garment’s “whiff of danger,” according to Ted Swedenburg, Professor of Anthropology at the University of Arkansas. “The keffiyah is seen as a global symbol of resistance because of its association with the Palestinians. It’s not mainstream, which appeals to hipsters.”