Though the mills of God grind slowly, yet they grind exceeding small. 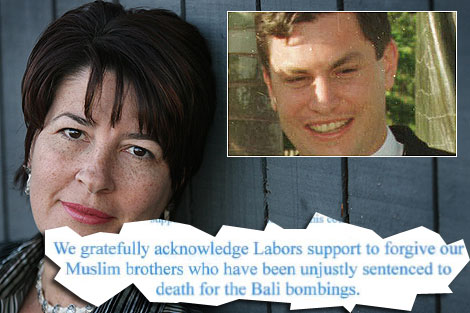 Small is how Jackie Kelly and her husband must feel. In a more civilised age they would be to ashamed to show their faces in polite company. Kelly’s husband who is a dentist was caught red handed letter-boxing ugly racist leaflets in the marginal seat of Lindsay.The islamic-pamphlet [pdf] purported to be from a Muslim group supporting the Labor party, supporting the Bali terrorists and predicting the building of a Mosque in Western Sydney. As we have previously shown, the threat of an Islamic infiltration of the burbs is a red button issue.

The leaflet was a fraud, a fake document used by the Liberal party to misrepresent the views of the opposition Labor party.The others involved were the husband of the incoming Liberal candidate and a professional Liberal party apparatchik Jeff Egan. One of those caught, helpfully covered his face with the incriminating leaflets thereby demonstrating his guilt.

In one fell moment they captured the whole media attention for the two most important news-cycles before the federal ballot.Kelly was already finished in the party, but her reputation and that of her husband has been destroyed forever. The standing liberal candidate (Karen Chijoff) and aspiring professional political operative Jeff Egan are finished in mainstream politics. Both Chijoff’s husband and Egan have been forced to write groveling apologies to the party.The greater truth here is that in the recent history of the Liberal party, it has always used Muslim bogeymen to force a temporary realignment of the political landscape. It has been an especially pleasing time, watching the venality of the contemporary Liberal party and its leader, be its undoing. The ultimate irony (which can only be divine in origin) is to see the last 48 hours of the Howard era be remembered for another contemptible attack on Muslims, but one which has backfired spectacularly.

The most powerful memory of today, the one which has made the most lasting impression on me, is the statement of Robin Margo Jewish board of deputies who spoke out strongly in defense of Muslims and said that religious bigotry must not be used to sway votes, and that such a tactic has an ugly history. Muslims should remember those comments which were made in the service of our honour, unprompted by people who we sometimes don’t treat that well.

All does not appear lost for Jeff Egan and Gary Clarke. They should take heart in the notoriety of Darrin Hodges, the You Tube celebrity… respectability however is an entirely separate matter.

Update: Jackie Kelly’s moronic defence of her husband’s actions, ensured the story had legs for another 24 hours. Its available here

Here is Kelly on election night